Did you know that in some placoderms the structure of their brain is described, although these animals are completely extinct? This can be possible due to the extraordinarily preserved internal parts of their braincase.


Placoderms are extinct paleozoic (Upper Silurian – Upper Devonian) vertebrates which inhabited oceans and fresh-water. They were characterized by the presence of articulated dermal plates covering their head and the front part of the thorax. While the plates consisted of true bone, the internal skeleton was most probably cartilaginous, sometimes with calcified parts. The placoderms had no true teeth – only ornamented dermal plates instead. The size span of placoderms was variable. The average length of their body was several tens of centimeters, but the largest could measure six meters in length or more.


There are two main groups of placoderms - Antiarchi and Arthrodira. Antiarchi were usually small (about 1 m long) and quite specialized. They lived mostly in freshwater environments and often possessed long limbs covered with small dermal plates which probably served for holding their body up straight in the substrate. A typical representative of Antiarchi is the Middle to Upper Devonian genus Bothriolepis. Arthrodira were placoderms of variable size from very tiny ones to the largest ever. These placoderms lived in the oceans and some of them could be active swimmers and even dangerous predators. Among the well-known representatives of the group is the genus Coccosteus.


In general, placoderms lived at the bottom or swam close above it. Only some of them could have been good swimmers. The bottom dwelling placoderms were most likely scavengers or fed on different kinds of animals such as mollusks or trilobites. One of the largest placoderms ever, Dunkleosteus, was certainly among the top predators in the Devonian seas.


Placoderms were very successful during the Devonian period (ca. 420 – 360 Ma), but later they were replaced by more successful cartilaginous and bony fishes. This was probably the reason why they became extinct. Stay tuned!

Did you know that the poison of the Indian Cobra is used in research, and for manufacturing analgesics and anti-cancer medications?

The Indian Cobra is a poisonous snake occupying large areas of the Middle East, from India through China and Indonesia. Indian natives call it nag, naga, pambo, gokhura or nagara havu. The snake is typically over one meter long, with a hood over its neck vertebrae which  it inflates when threatened. Its body is variously colored, from creamy white through brown and all the way to black. Sometimes, the Cobra has a typical half-ring patterns on the back of its neck.

Indian cobra lives anywhere it can find suitable shelter, even in areas occupied by humans. Cobras do not normally attack humans when not threatened, except during mating season. When meeting a cobra, the best strategy is to remain calm, since cobras react aggressively to rapid movements. The cobra's poison, similarly to that of other rat snakes (genus Elaphe), has primarily neurotoxic effects.

Did you know that silverfish belongs to an ancient order of insects (Zygentoma), which appeared on the Earth in the Carboniferous period (360-300 million years ago)? Or that silverfish do not need to drink, because they absorb water from moist air through a specially adapted anus?


Silverfish are miniscule wingless insects, whose body is covered with silvery scales. They are mostly  nocturnal, when they seek out humid areas (bathrooms, toilets, basements), or places where there is plenty of food and shelter (bakeries, pastry-shops). Don't worry, the presence of silverfish in your home does not indicate lack of cleanliness, but more likely abundant hiding places. In small numbers they are essentially harmless, but they can cause problems when they multiply.


Silverfish avoid light and can often be spotted trying to hide in a corner after the lights are turned on in a room. They live on substances containing protein and saccharides, like paper, books, tapestries, cotton, leather, silk, flour, sugar, cereals and glue. Silverfish also live in nature, usually dwelling under rocks, fallen leaves, bark and such. They lay up the three eggs at a time in tiny cracks and can live up to six years.

Learn more about silverfish on Nature at your Home. Stay tuned!
Posted by OpenUp! at 10:43 AM

Did you know that members of Henry Hudson's expedition were the first Europeans to have reached the famous Manhattan Island on September 12th, 1609? They met friendly Indian tribes Algonquin and Lenape.

In 1610, on the ship named Discovery, Henry Hudson set out on the fourth of his attempts to find the Northwest Passage. He sailed from the southern tip of Greenland to Labrador, and then turned to the north. He encountered a wide channel and assumed that this was the way to China. From that day on, the bay had been called Hudson's Bay. Then, he sailed into the bay, which he assumed to be part of the Pacific Ocean, then travelled further to the south into what is known today as James' Bay.

In June of 1611, he set out to continue the expedition. Several days after leaving the bay, his crew mutinied. They had had enough of exploring and wanted to go home. The captain refused to consider their demands. When the crew was unable to persuade him, they set him, his son John and seven crew members loyal to Hudson adrift in a small boat and left them to their fate in a stormy and freezing sea, with no prospects of rescue. Nothing further is known of their fate.

Locating the Northwest Passage eluded Henry Hudson, but his enthusiastic description of the area near the mouth of the Hudson River led to Dutch to colonize the area and found New Amsterdam, later New York. At the time of these discoveries, Henry was in the service of the Dutch.

one of the real joys of this Christmas season is the opportunity to say thank you for your favour and also to wish you all the very best for the New Year. 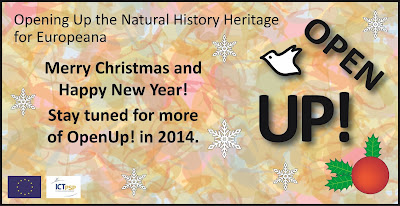 If you are a user of the Europeana.eu portal or would like to know about it, we would appreciate very much if you could contribute to this short survey for users and potential users of the Natural history content of Europeana.

Your help would be much appreciated,

In 1952, Danish expedition named Galathea caused sensation among zoologists, when it discovered deepwater mollusks of class Monoplacophora near the coast of Mexico. Previously, the group was assumed as extinct for hundreds of millions years. Monoplacophoras were widespread in the Paleozoic Era, especially in the Cambrian, Ordovician, Silurian and Devonian Periods.


These ancient organisms belong to phylum Mollusca and (similarly to snails) have a single shell composed of calcium carbonate. The shell is bilaterally symmetrical and oriented with its tip forward. This was probably the original orientation of molluskan shell. Other unusual features of monoplacophorans include for example hint of body segmentation, which is well reflected by the arrangement of paired muscle scars (see image).

You can read interesting studies on fossil monoplacophorans here: