Long Night of Science in Berlin

On Saturday 2 June 2012, the Long Night of Science was held in selected institutions in Berlin.  Exhibitions and research facilities were opened to the public. Museum für Naturkunde could not be missing, as well as presentations of the projects OpenUp! and BHL- Europe. From the other projects also presented GBIF, Wikipedia, Wikimedia and many others. OpenUp project! introduced new posters during this event on the GBIF stand. Within the BHL-Europe stand was presented also Biodiversity Library Exhibition.

The scientific night in MfN was attended by hundreds of people and we are happy to declare this event associated with the presentation of the OpenUp! project as very successful.


The OpenUp! project was presented during the official inauguration of the new general director of the Museum für Naturkunde, Prof. Dr. Johannes Vogel, in Berlin 8th of May 2012.
The new OpenUp! roll-up screen was attracting a number of interested attendees. The ensemble was completed by a show case displaying original objects of the museum’s butterfly collection, already visible in Europeana. 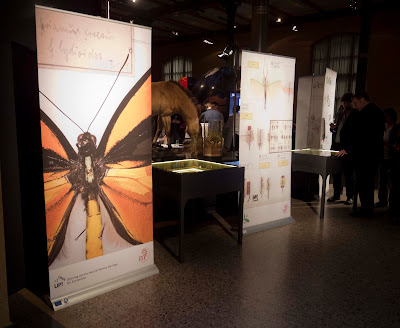