The conference was held in the Muséum Nationale d’Histoire Naturelle, for three consecutive days. It was a great opportunity for all 23 project partners to meet and discuss the project face to face. There were almost 60 attendees, including several guests. 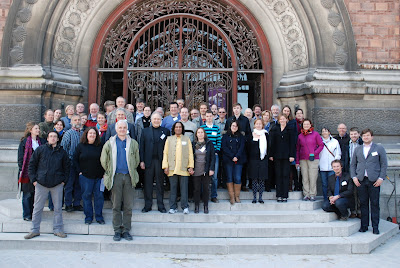 The first day of the meeting was divided into two important sections. In the morning, the two main working groups ran parallel meetings: the Outreach and Dissemination Group, and the Technology Management Group. Tasks fulfilled during the preceding year were discussed and future steps laid out according to the project plan. In the afternoon the OpenUp! tutorial took place, where an update was given on technical aspects of the content provision. The session was structured into several presentations, each with a subsequent discussion. The internal Steering Committee meeting runs in parallel.
The second day of the meeting was held in the beautiful wooden Amphithéâtre de Paléontologie. The day starts with content providers meeting which was followed by project assembly meeting for the rest of the day. This meeting was organized for all project partners and several guests. The talks were structured into thematic groups like technology, content provision, dissemination and administrative issues. Further presentations covered virtual exhibitions and cooperation with related projects like BHL-Europe. Besides the project members, several guests representing the Natural Europe project and Europeana attended, adding useful views and ideas about synergies.
The Review meeting with the EC Project Officer and Evaluation Panel was held on the third day. Feedback from the reviewers in the meeting was generally positive and we are looking forward to their evaluation report.
Under this link you can find all presentations and minutes from the Project Assembly session.
Posted by OpenUp! at 10:39 PM