It is Friday, time for the Spice of the week, but we have something special for you today. We would like to introduce a new BLE topic describing various poisonous species from different parts of the world – Poisonous Nature.

You can find more than 30 species belonging to different groups, which you may not have had any idea could be poisonous. More species will be added regularly in the future, and we will inform you about each of them. The images and illustrations link to their variable sources: BHL, EOL or Europeana (including content from the OpenUp! project). This new topic also includes more than 90 books describing the species in more detail.

Here is the first highlight from Poisonous Nature, one of the symbols of Christmas, which brings fortune and blessing to your homes – European Mistletoe (Viscum album). Did you know that mistletoe contains the poison lectin, which strengthens the body's immune reaction against cancer and even slows tumor growth?

Mistletoe is an angiosperm, living as a hemi-parasite on other plants. It uses its special root-like organs (haustoria) to steal nutrients, water and minerals from its host. As opposed to true parasites, it also uses photosynthesis to create its own organic substances. There is only one species of mistletoe in Europe: European or Common Mistletoe (Viscum album). It can grow on deciduous or coniferous trees, dependent on the subspecies. The poisonous qualities of mistletoe have not been conclusively proven; only larger quantities are known to cause diarrhea and stomachaches. Only in nursing infants can poisoning have more severe consequences.

You can find more about the mistletoe on BLE PoisonousNature. We wish you great Christmas Holidays and of course, stay tuned!!
Posted by OpenUp! at 2:57 PM

Our new content highlight comes from the collections of invertebrates and represents a large group named 'gastropods'. Did you know that Conus geographus has a poisonous stinger? It is located on the tip of a long, extensible tentacle, which can reach up to three-quarters of the length of the shell. 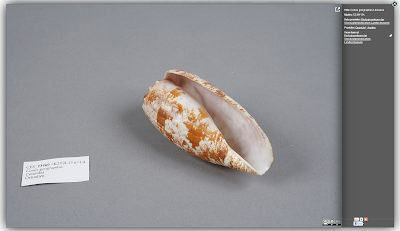 Conus geographus is a type of sea snail, found among coral reefs in the Indo-Pacific Ocean, and in the Red Sea. Its shell is wide, thin-walled and barrel-shaped. The mouth of the shell is long and relatively thin, only in the lower part is it markedly wider. Color is a characteristic irregular white with brown spots. The shells of Conus geographus have always been prized for their beauty, and are of interest to collectors. The geography cone is a predator, even capable of catching fish. 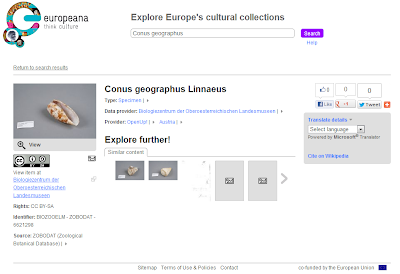 It is one of the few snails that can be dangerous to humans. The geography cone, like other cones, attacks its prey by using an extensible tentacle, tipped with a poisonous sting. The stinger is shaped like a hollow harpoon, even possessing rear-facing spines. Its venom is strongly neurotoxic, causing muscle paralysis, accompanied by pain, nausea, vomiting and abdominal colic. More severe cases display accelerated pulse, double vision, vocal paralysis and uncoordinated movements. There is no antidote for cone venom; treatment consists solely of trying to keep the victim alive until the poison wears off.

The geography cone starts off our new series, which will introduce more than thirty poisonous species from different taxonomic groups and parts of the world. If you are interested in learning more about poisonous nature, stay tuned to us. We will have a surprise for you at the beginning of next week!
Posted by OpenUp! at 2:35 PM

We are pleased to inform you that the 3rd OpenUp! Newsletter was published today. The 20 pages of this issue are full of interesting articles and news of the project from previous half-year. 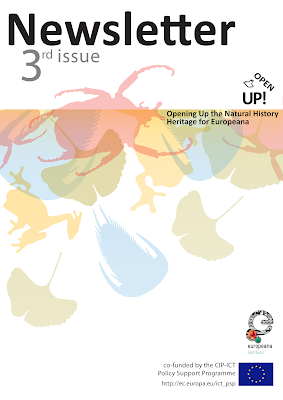 Briefly, this 3rd issue includes articles about our dissemination activities, OpenUp! content on Europeana and its actual status, and for the techies in the audience, we included the actual OpenUp! technical workflow. The last six months were full of conferences, and of course we presented our project at every opportunity.

In this issue we also explain the improvement of our Virtual Exhibition platform BLE, which was promoted in Beijing this fall. There is also a short preview of the new topic we are currently preparing, "Poisonous Nature", which will be released on December 17th, and you will be informed in detail about this event.

Check out the newsletter online on the OpenUp! website.
Posted by OpenUp! at 10:11 PM